On Here and Now this week, Katee Kross is joined by Glasgow singer songwriter, Andrew Nicol. 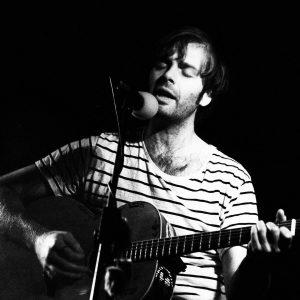 Katee Kross‘ guest on Here and Now this week is Andrew Nicol. A relative latecomer to performing, Andrew has spent the past 7 years honing his craft and developing his unique take on introspective pop with an Americana twist. Citing Ryan Adams, Neil Finn and Band of Horses as significant influences, Nicol’s songwriting unsurprisingly focuses on melody driven reflection with a healthy dose of angst and occasional humour.

Having recently played a sold out show at Celtic Connections in collaboration with fellow songwriter Rachel Elliott resulting in the formation of Nicol & Elliott as a tangible project, Andrew Nicol has had a busy start to 2018. Add to this the inclusion of a backing band (aptly named The Trazodone Band) to boost his solo sound and it seems thing will only be getting busier for the Glasgow songwriter. With the opportunity to delve into new territory of songwriting and explore new influences, Nicol appears to have found projects capable of matching his prolific songwriting.