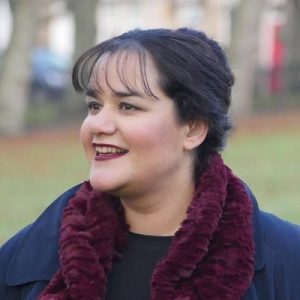 On this week’s Full Scottish, Naina Bhardwaj is joined by city of Edinburgh Councillor Ashley Graczyk, who announced in a letter, posted on Facebook this week, that she now would vote Yes in a Scottish Independence Referendum.

In her letter, Ashley detailed the 3 reasons behind her decision; firstly, the impact of the UK Conservative Government policies on people and communities, particularly the difficulties faced by those trying to navigate the DWP benefits regime and in particular the the effect those policies were having on disabled people.

Secondly, Ashley became dismayed by the UK Government refusing to provide the necessary support, to enable disabled people to participate in the democratic process on a level playing field.

Ashley’s third reason, was her belief in self-governance.

You can read Ashley’s letter in full here.

Yesterday, there was a demonstration outside BBC Scotland’s Pacific Quay, protesting about the perception of pro-union bias at the BBC. Broadcasting Scotland were there to report on the event and we have a video of the demonstration to play out the programme.