Due to technical difficulties, the programme will now be broadcast on 24/05/2018 at 8:00 pm. Sorry for the inconvenience.

On Here and Now this week, Katee’s guest is stalwart of the Edinburgh live music scene, Norman Lamont. 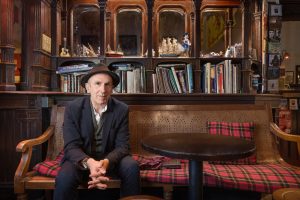 A timeless, classic singer-songwriter, Norman Lamont is as much at home in echoey electronics as in intimate acoustic settings. His songs are always melodic and memorable, but his subject matter ranges from the surreal and spiritual to quirky humour.

Over the last 15 years he has produced four albums of original songs: The Wolf Who Snared The Moon (2004) set out his stall, with dreamlike story-songs, humour and two fan favourites, the award-winning Ballad of Bob Dylan and the Bond-theme rush of the title track. Two subsequent EPs of ‘relationship’ songs were later repackaged as Romantic Fiction, approaching love stories with both tenderness and knock-down humour. The most recent two albums Roadblock (2008) and All The Time In Heaven (2013) were darker, dealing sensitively with themes of loss and grieving.

He has also produced a live album, an album of instrumentals and a compilation, Anywhere But Here.
He is about to release In Another Life with his band The Heaven Sent, an upbeat, acoustic-based album with a more positive spin, including a revisited Ballad of Bob Dylan.

This week, Katee winds up the show with her song “Hold On”.

Edinburgh, Here and Now, Katee Kross, Norman Lamont, Out of The Bedroom