This week, Katee’s guest on Here and Now is singer songwriter, Andrew Huggan from Clackmannanshire.

In the last programme in the current season, Katee’s guest is Andrew Huggan. 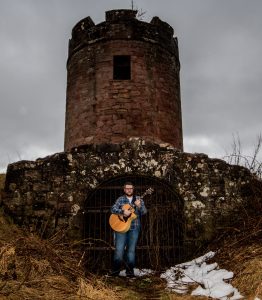 Andrew is a folk singer-songwriter from Scotland’s smallest county, Clackmannanshire, known locally as “the Wee County”. He draws his inspiration from his laid back and light-hearted outlook on life, his travels and adventures from travelling around Scotland and his memories of growing up in a small Scottish village.

Andrew’s music is primarily influenced by classic folk-rock super group Runrig, as well as other singer-songwriters such as Boo Hewerdine and Richard Thompson. His songs typically feature his accented voice accompanied by strummed acoustic guitar, with electric guitar, bass and piano making an appearance in his recordings.

Andrew’s debut album “Travels” was Celtic Music Radio’s album of the week upon release in December 2012. He has shared the stage with the likes of the award winning Skerryvore, English folk rockers Coast and traditional folk singer Andrew Gordon and his performed in venues across the UK and Denmark. He also attended Glasgow Songwriting Festival 2017 where he learnt tricks of the trade from Findlay Napier, KarinePolwart, Emma Pollack and Jim Hunter.

It’s over five years since his debut album was launched and Andrew is currently working on a new album due for release this summer.

This week, Katee will be singing the show’s theme tune “Here And Now”.