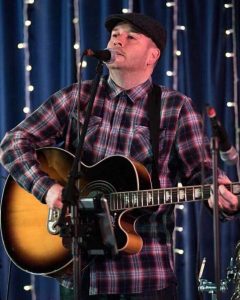 Originally from Salford, Greater Manchester, Scott Ashworth has lived in Denny, Stirlingshire for 16 years. He moved to Denny with wife Tracey, a Denny native, after they both left the Royal Air Force where Scott had served as a military musician for almost 14 years playing Saxophone.

After a few years hiatus from music, Scott started attending a few open mic nights in 2013 playing guitar and singing and soon began to gig widely across Central Scotland.

With a passion for Americana/Country music, Scott released an EP, Drifting Away, in 2017, a year which saw him win Best Solo/Acoustic Act and also Song of the Year in the Alternative Music in Falkirk (AMiF) Awards 2017.

2017 also saw Scott travel to Nashville for the trip of a lifetime, where he managed to see some of his favourite acts perform and also managed to sing himself in a Honky Tonk on Nashvilles famous Broadway.

2018 has already seen Scott supporting established Americana and Country Acts such as Grammy nominated singer/songwriter Gareth Dunlop and popular UK Country band Ashton Lane.
With gigs already booked as far afield as Manchester, and lots of new writing hopefully leading to another EP or possibly full album towards the end of the year.