On the Full Scottish this week, Cameron Archibald is joined by Kirsten Oswald, former SNP MP for East Renfrewshire.

In another busy week for Scottish politics, we will be talking about the Scottish Government Cabinet reshuffle, Tory dark money and Arlene Foster, walking the highways of Cowdenbeath. We will also be looking at the advance of the far right in the EU and US President, Donald Trump coming to Scotland. 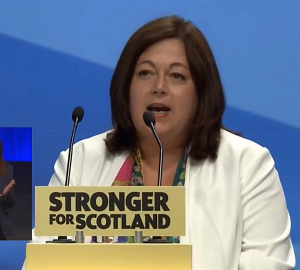 Kirsten Oswald joined the SNP in June 2014, and was selected as SNP candidate for East Renfrewshire in January 2015. She was the MP for East Renfrewshire and was SNP Spokesperson for Armed Forces and Veterans from May 2015 to June 2017. Kirsten describes Representing the folk in my local community as “The privilege of her life.”

Kirsten is now the Convenor of the Eastwood Branch of the SNP, a member of the SNP National Executive Committee. This past year, she has campaigned all over Eastwood, Barrhead, Neilston, and around the country from Penicuik to Pitlochry, spoken at events, including at the SNP Conference on 8th June. The resolution on Changing Places Toilets which Kirsten proposed for Eastwood SNP branch was agreed with enthusiasm.