On this week’s Full Scottish, Richard Walker will be joined by crime writer and Bloody Scotland co-founder, Lin Anderson and by Keith Brown MSP, Cabinet Secretary for Economy, Jobs and Fair Work and the second of the SNP Depute Leader candidates to be a guest on the programme.

Keith Brown has been a Member of the Scottish Parliament since 2007 and is currently the constituency MSP for Clackmannanshire and Dunblane. Before his election he served for eleven years as a councillor in Clackmannanshire, and held the post of Council Leader from 1999 to 2003. He was appointed Minister for Skills and Lifelong Learning in February 2009 and has since held a number of ministerial roles before becoming Minister for Transport and Veterans in September 2012. In November 2014 he became Cabinet Secretary for Infrastructure, Investment and Cities and in May 2016 he became Cabinet Secretary for Economy, Jobs and Fair Work. Throughout this time, he has still held responsibility for veteran affairs.

Keith worked for 15 years as a local government professional in neighbouring Stirling, where he was also an active trade union representative with UNISON. He is a graduate of Dundee University and studied at the University of Prince Edward Island. Originally from Edinburgh, Keith now lives in Dollar with his three children.

Lin Anderson is best known as the creator of the forensic scientist Rhona MacLeod series of crime thriller novels, and for her part in founding the annual ‘Bloody Scotland’ crime writing festival, dedicated to promoting Scotland’s other great national export. Lin’s Rhona MacLeod novel Paths of the Dead was shortlisted for the 2015 Scottish Crime Book of the Year.

Lin’s Rhona MacLeod novels have been published in translation in a number of countries, including France, Germany, Italy, Netherlands, Sweden and Russia. 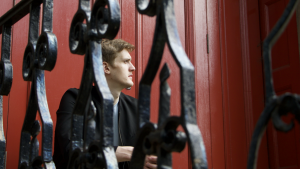 DB Hews is a songwriter and artist from Dublin, working out of blues, folk and classic soul, combining innovation on traditional forms with lovingly pieced together lyricism. He is currently working on material for his debut EP with Wavefarm Productions in Ireland. As well as this, he is preparing for a series of gigs before the summer’s festival season, beginning with Sneaky Pete’s, Edinburgh, on the 28th March.