Welcome to the Full Scottish live from our Cowcaddens Studio in Glasgow.

This week on the Full Scottish, Rachel McCormack is joined by novelist, Sara Sheridan and Maureen McGonigle from Scottish Women in Sport.

And then there were two. After successive rounds of voting, by the end of the week, the tory leadership hopefuls were reduced down to Boris Johnson and Jeremy Hunt as the two who would go forward to the party membership for the final say on who would be the next UK Prime Minister. Don’t you just love democracy in the UK?

Following the opinion poll from earlier this week, which showed that tory voters would rather see Scotland and Northern Ireland leave the UK or even the destruction of the tory party, rather than have Brexit stopped. This is about to be tested especially following the revelations of the police being called to a “domestic” at Boris’s home. Will he be damaged by this or like all the other flaws in the man’s character, will the determined tory Brexiteers vote for him and the no-deal Brexit, which is starting to look like the outcome to the Brexit fiasco.

As always, the implications for Scotland don’t even merit an afterthought in the Brexit process. How should Scotland respond to Boris Johnson taking us out of Europe in a no-deal Brexit?

Tensions between the US and Iran are still high, as Trump called off an air raid after the planes were in the air, when he realised that 150 dead in retaliation for Iran shooting down an unmanned drone might be a disproportionate response. The war of words continues as news comes in of a US cyber-attack on the Iranian Revolutionary Guard’s weapon systems. The concern is that before the consequences are thought through, the US and Iran drag the whole region into war.

As the Scottish Women’s Football team arrive home, with their heads held high, we are asking “Where are the Women?” Women in other sports, women in politics, women in board-rooms and women in History. Our Full Scottish panel will discuss this in the depth it deserves.

Sara Sheridan is an Edinburgh-based novelist who writes cosy crime noir mysteries set in 1950s Brighton and historical novels based on the real-life stories of late Georgian and early Victorian explorers. She has also written for children – her picture book I’m Me has appeared on CBeebies three times – and occasionally takes on commercial non-fiction project including, in 2017, writing the companion guide to the ITV series, Victoria.

She takes a broad approach to research from the archive to the vintage shop. Sara is also an active campaigner and feminist. She is a twitter evangelist and a self-confessed swot (that’s a nerd if you’re from the US).

Sara believes writers need writers and has sat on a variety of committees in writing organisations as well as taking part in a plethora of writing exhibitions. She occasionally mentors fledgling writers for the Scottish Book Trust and appears regularly as an after-dinner speaker at corporate events.

In 2016, with her daughter, she founded the brand REEK. perfume with signature scent – Damn Rebel Bitches, which has been called ‘the first feminist fragrance.’ The company’s second scent WITCHES was a top pick of beauty editors at both Stylist and Elle Magazine.

Sara has been named one of the Saltire Society’s 365 most influential Scottish women, past and present. Sara is also patron of registered Edinburgh charity Its Good 2 Give, which provides support for critically ill children and their families. 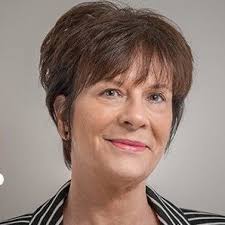 Maureen McGonigle is the Founder and CEO of Scottish Women in Sport which is a national equity charity launched in November 2013 to increase the profile and raise awareness of all areas of women in sport in Scotland. Its vision is for a Scotland where females of all ages, abilities, ethnicities and walks of life are participating in sport or physical activity; within a positive, equitable culture where their achievements are promoted and celebrate.

Chair of Scottish Sports Futures an organisation that uses the power of sport to empowers young people to make positive lifestyle choices. A member of the Board for The School of Social Entrepreneurs, which is a charity that supports people using entrepreneurial approaches to tackle complex social problems.

Maureen has been involved in sports administration for over 25 years. Executive Administrator of Scottish Women’s Football till December 2013, Maureen was the first female Scottish FA Council Member and Non-Professional Game Board member in football in Scotland. She is now the only Scottish FA female life member and is currently a member of the Scottish FA Judical Panel.