On this week’s Full Scottish, the focus is farming, Skye and a 500 mile walk to Edinburgh.
Lindi Harrison will be joined by NFU Scotland Director, Willie Harper, and Jim Fairlie, the founder of scotland’s first Farmer’s Market.
In the week that the UK Government announced it’s Agricultural Bill and Brexit negotiations continue to appear rudderless and the in-fighting in the Conservative Party intensifies, we travelled to Skye to interview Ian Blackford MP to get his response to the issues facing Scottish Agriculture and the future of Scotland, and in particular the importance of Scotland the Brand. 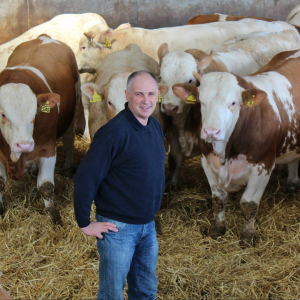 Willie Harper, is a Tenant Farmer in Renfrewshire Farming Beef and Sheep at Gryffe Wraes Farm, Bridge Of Weir and also Arable Crops for his Landlord. Willie was brought up on the Family Dairy farm before setting up his own business in 1992 at Gryffe Wraes Farm. His brother is still milking cows at the home farm.

Willie is married with two daughters, with both of them taking careers outside of farming. He is member of National Farmers Union of Scotland and currently holds the post of Regional Chairman for the Forth and Clyde Area and he also sits on the National Board of Directors.

Jim Fairlie is a first generation farmer, founder of Scotlands first farmers market, co-founder of Farmers for Yes and is .still actively working for an independent Scotland.